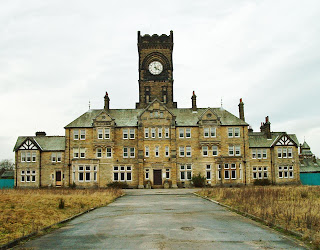 Today I went back to the deteriorating former mental institution where I spent some time as a patient forty years ago. This picture shows that they cleaned up the stonework about a year ago, but not the clock tower. It still has an eerily, Gothic appearance to me.

As mentioned in an earlier blog posting, I did go back there recently to be filmed in the grounds for a documentary which goes out on BBC4 in the New Year and is to be used by the Open University. This documentary has been given the (purposely provocative) title of 'Mental: A History of the Madhouse'.

The filming today, however, was for another (unrelated) BBC documentary, one which will be shown on the Yorkshire and Lincolnshire Inside Out programme, and this time we actually went inside the building.

The West Riding Pauper Lunatic Asylum (as it used to be called until the name changed to High Royds Hospital) was once a magnificent building (from an architectural standpoint) with intricate mosaic floors, stained glass windows and elaborate archways. It is now in a dismal state of disrepair. At first we were told we wouldn't be allowed to go inside without wearing tin hats (health and safety rules) and boots, but this was later waived. I met up with reporter Charlotte Leeming, two camera men, and a site construction official who let us in.

With a camera man in front of us, Charlotte and I wandered along freezing cold, dim corridors with peeling walls and muddy water on the floor, while I reminisced about this place in the late-sixties and early-seventies. I remembered seeing institutionalised long-stay inmates shuffling along these corridors, some chuntering to themselves, and looking dejected. I was a teenager then, who felt I'd somehow strayed into a different world.

We went into the ballroom. Yes, among the labyrinth of corridors in this house of horrors, there had been a huge and grandiose ballroom. My mind travelled back to the teenage me at a Christmas dance there, and I could picture again the sad-eyed patients in paper hats doing a largactil shuffle around the floor to the sound of a band playing 'White Christmas'. It seemed strange to be there inside that same place forty years on, and the memories were so vivid.

What a building that is! Atmospheric but very spooky looking. You were so brave to go back in. Really.

First corridor we walked through was pitch-black and I was expecting rats to jump out at me (not just my imagination, the security man said there were rats there). I felt like I was doing one of those bushtucker trials, and I was scared stiff!

Do you know when the programme Mental: History of the Madhouse is to be shown? I am really interested in the Rainhill Lunatic Asylum History and the programme sounds very interesting? Thanks Janice

Jean
Hi, I'm Jean. I'm fifty-something, married to Ian, and live in West Yorkshire. I'm a writer, and part-time mental health worker. My memoir 'The Dark Threads' is published by Accent Press. As a mixed-up, depressed teenager in 1968 I was heavily drugged, given electric shock treatment, reduced to a zombie and, by age 20, 'written off' as suffering from chronic schizophrenia (a misdiagnosis, evidence suggests). I managed to jump out of the net in 1974 and went on to build up a life for myself. Today life is good, good, good. I have a first-class BA (Hons) degree in Combined Studies (literature and psychology), and qualifications in counselling skills. 'The Dark Threads' is my first book. http://www.amazon.co.uk/Dark-Threads-Jean-Davison/dp/1906373590