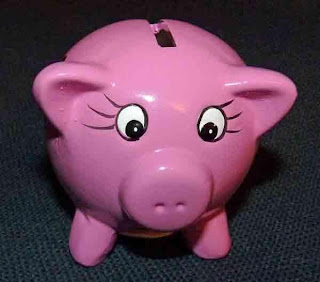 A sweet old lady in her nineties, whom Ian regularly visits, gave him this pink piggy money box as a present. About an hour ago he announced that he will use it as a swear box. Each time he swears he has to put a pound in it. When full, the money will go to a charity (which one is still to be decided).

It wasn't long before the first pound went inside. I was questioning him about something I disagreed with, and he told me to stop asking b... stupid questions. The second pound had to go in not long after the first. He was asleep on the sofa and I looked up my book ranking on Amazon. 'Ooh, it's sold one today!' I yelled, jolting him into the land of the living and out he came with another swear word.

If he carries on swearing at this rate it will soon be full. He says I'm purposely antagonising him into swearing. (No, I'm not, says I innocently. Come on, Ian, you can't blame me. You're not a puppet.) I've decided not to join him in this particular fund raising for charity venture. It's not that I swear a lot normally. Actually I swear very little, but if I start thinking about it and trying not to, then I'm sure the words will just come out.

So I'll leave this one to him and see how he gets on. Watch this space.
Posted by Jean at 16:13

As it's for charity it might be worth taking up swearing - all in a good cause :o) I'm sure it would soon be full in our house!

Karen - It's filling up. Think a pound might be too much for just one word. Might drop it to 50p or lower. On the other hand, perhaps not as, yes, it's all in a good cause.

I've been meaning to say, I saw you on History of the Madhouse on BBC Four the other evening and thought you came across really well. My daughter watched it with me and jumped when I started shouting, "I know that woman - well sort of."!

Karen - Glad you managed to catch it, and thanks for your comments.

Jean
Hi, I'm Jean. I'm fifty-something, married to Ian, and live in West Yorkshire. I'm a writer, and part-time mental health worker. My memoir 'The Dark Threads' is published by Accent Press. As a mixed-up, depressed teenager in 1968 I was heavily drugged, given electric shock treatment, reduced to a zombie and, by age 20, 'written off' as suffering from chronic schizophrenia (a misdiagnosis, evidence suggests). I managed to jump out of the net in 1974 and went on to build up a life for myself. Today life is good, good, good. I have a first-class BA (Hons) degree in Combined Studies (literature and psychology), and qualifications in counselling skills. 'The Dark Threads' is my first book. http://www.amazon.co.uk/Dark-Threads-Jean-Davison/dp/1906373590